Through the Looking Glass: An Alternative View of the BC Real Estate Market


During a recent trip to Las Vegas, I realized how big of a price gulf existed between our respective real estate prices. Imagine a 1,600 square feet, 3 bedroom house in Las Vegas’ nicest neighbourhood, bracketed by new malls and great elementary schools. Neighbors of this master plan community sported SUVs and trimmed lawns, the essence of a picture perfect suburb. 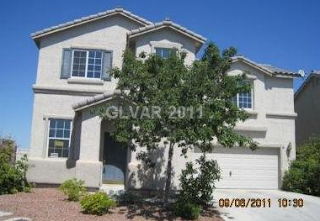 This place is called Summerlin, and the house in Fig. 1 is on the market for $150,000. As a BC resident, I can’t remember the last time $150,000 meant something more than a down-payment. While Las Vegas and Vancouver are very different cities, it got me thinking about the underlying assumptions behind our real estate boom. 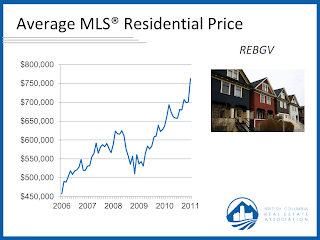 So what is the current state of British Columbia's Residential Real Estate Market?

So my question to readers and real estate experts alike is: Who’s our sugar daddy? Is it domestic demand? Is it rich new immigrants? Is it those mysterious foreign investors?

Can the average BC resident afford a home?

What if historically low interest rates enticed BC residents to buy real estate, creating genuine demand? Let’s run the numbers and see how likely this scenario is.

The resident earns $827 a week as of 2011 (Fig. 3)(2). To put it another way, two average working parents make bit more than $6,600 a month before taxes. Saving for the $100,000 down payment would take 3-6 years depending on how much they can set aside, especially if they are renting. They then borrow $500,000 from the bank. Then, assuming they set aside half their income ($3000 a month) to pay off the mortgage, the amortization period will be 25 years. In other words it takes almost 30 years for a middle class family own a home free and clear! Meanwhile, with $3000 a month left after taxes, they’d have some major problems saving for retirement, their kids’ college fund and buy a car, let alone that tropical vacation they always wanted.

I offer this view simply to illustrate that: The average BC resident earning today's wages cannot easily afford a home at today’s prices, even with the absurdly low interest rates.

International immigration accounts for a good 70% of BC’s population growth. Conventional wisdom suggests an almost mythical belief that Asian immigrants, especially the Chinese, are driving up the price of real estate in BC, bringing a flood of demand into an otherwise sleepy market. Is that what’s happening? 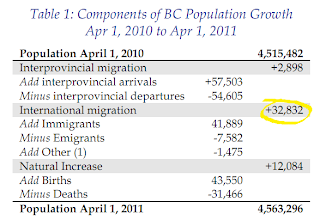 According to BC Statistics, a net total of 32,830 new international immigrants arrived in BC from April 2010 to April 2011 (Fig. 4)(3). A third immigrated under the ‘family class’, the rest as individuals. Surprisingly, only 20% of these immigrants are actually from China. Assuming an average BC household size of 2.5 people (4), an influx of 32,830 new immigrants really means an influx of 13,000 new households, each requiring only one house. As a new skilled immigrant myself, I vouch that BC homes are too expensive at my current income level unless I have substantial financial support from my family overseas. But for argument’s sake, we’ll assume that every single immigrant family can afford a house at today’s prices.

The Real Estate Institute of BC states 74,640 properties were sold in 2010 and estimates that 80,000 will be sold in 2011 (1). Even assuming every immigrant family bought a house, that’s 5 houses being sold for every immigrant family! On top of that, 25,000 new houses will be constructed in 2011 (1). With supply far exceeding the number of new immigrants, who will actually live in these newly sold properties? 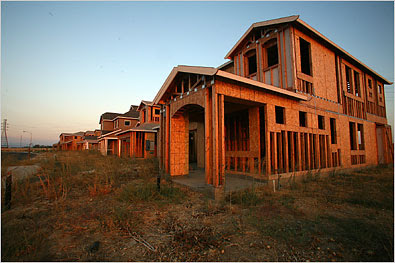 One tantalizing possibility to explain this pricing madness is a genuine influx of non-resident investment from Asia. People with pockets full of cash, who won’t be living here, aren’t restricted by local earning limitations, aren’t planning on renting their empty houses to anyone. Are they the culprits of BC's high-flying real estate?

Since there is no hard numbers detailing the scale of these investments, one can only speculate (pun intended) its effects on BC real estate. Of course, another problem arises in this scenario, namely an excess supply of empty ‘investment’ units reminiscent of Las Vegas’ boom years. When the investment soured there in 2008, underwater investors simply walked away from their properties, leaving behind a devastated moonscape of foreclosures.

Who's really driving up the Real Estate market in BC?

I’ve outlined reasons why new immigration realistically accounts for a mere fraction of the real estate demand. I’ve illustrated why I don’t believe the current market price is affordable to the average BC resident. Yet my realtor insists the majority of properties are bought by BC residents themselves. Data shows that BC residents are paying 65% more per month on mortgages in 2011 compared with 2000 (1). Our wages definitely didn’t increase 65% in the last decade.

The only reasonable explanation why we’d borrow to the hilt and buy such unaffordable homes is the hope, nay, the expectation that as high as the prices are this year, it will rise further next year! Many of us speculate that if the real estate appreciates 3% next year, we’d have an instant payoff of $18,000! That’s right folks, we’re greedy! Some of us are simply afraid of being priced out for the next decade. But all of us are in effect, taking out ever bigger mortgages, tossing around 80,000 properties like hot potatoes, and all the while blaming it on rich international immigrants for the rising prices!

In other words, WE (the people of BC) are the ones driving up real estate prices.

Let’s hope for everyone’s sake that there are strong fundamentals supporting our $25 billion dollar real estate market. Because a 3% rise in home prices would mean somebody, somewhere will have to plunk down an extra $750 million in BC! So I invite all of us to reflect, lest we suffer the same fate as our overextended southern neighbours.

Updates: Corrections made. Thanks to Victor for spotting a calculation error. ;)

YJ
Trained in biochemistry from SFU, YJ spent most of his adult life meandering about from one specialty to another. Currently he's interested in business analysis and economics.